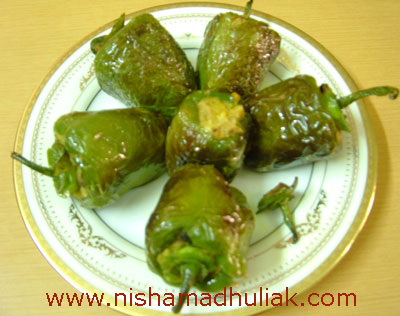 - How to make Stuffed Shimla Mirch

Peel the boiled potatoes and break them into small pieces. Pour 1 tbsp oil in a frying pan(kadhai) and heat, put Heeng and Jeera in hot oil. After Jeera is roasted put turmeric powder, coriander powder, red chilly powder. garam masala and Amchur powder. Fry these spices for 1/2 a minute. Add potatoes and salt in it and stir fry for 2-3 minutes. Take the pan off the gas and allow it to cool. Stuffing required to fill the capsicums is ready.

Now take a capsicum and fill the stuffing in it. Use the stem that you cut earlier to pin the two side of the capsicum together. Now similarly stuff all the capsicums.

Take out Stuffed Capsicum in a bowl. Serve with parantha, naan or chapati.