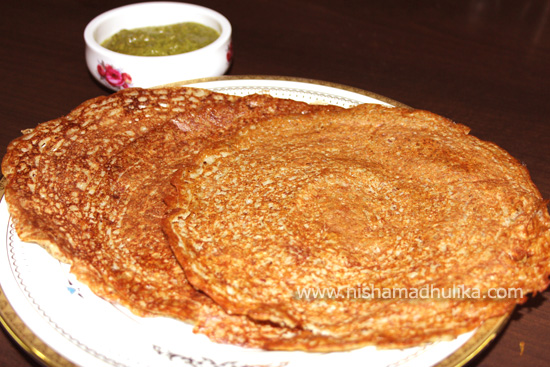 Sprouted Grains is a very nutritious food. You can either eat it  raw, or  can even boil them. You will definitely like cheela made with sprouted grains and can also be packed for your kids tiffin. So lets prepare Sprouted Grains Cheela.

Mehod - How to makeSprouted Grains Cheela

Take out the seeds from Green Chilli and wash it, peel the ginger and cut it into big pieces. Now make a paste of sprouted grains, ginger, and green chilli.

Put the mixture in a big bowl and add flour to it. Mix it well to make a batter of the dsame consistency, that is sued to make pakoras. Add salt, heeng, red chiili powder, coriander powder, and coriander leaves in the batter.

Now take a non-stick pan, heat it and grease it with 3-4 drops of oil. Take a spoon full of the mixture and spread it evenly on the pan in a circular motion. Pour some oil on all four corners of the cheela and few drops at the top of it.

When the bottom layer turns brown and the upper layer changes its colour, turn thre sides. Cook it till both the layers turns brown in colour. Now take a plate and spread a napkin paper over it. Put the cheela on that napkin first and then serve it. The napkin will soak all the extra oil from the cheela.

Now make rest of the cheelas with the same method. Serve the Sprouted Grain Cheela with curd, or green chutney.

Suggestions:
You can add any vegetable to the mixture. Grate the vegetables like carrot, cauliflower, etc and add it to the mixture of sprouted grains. Vegetables will enhance the taste of Cheela.