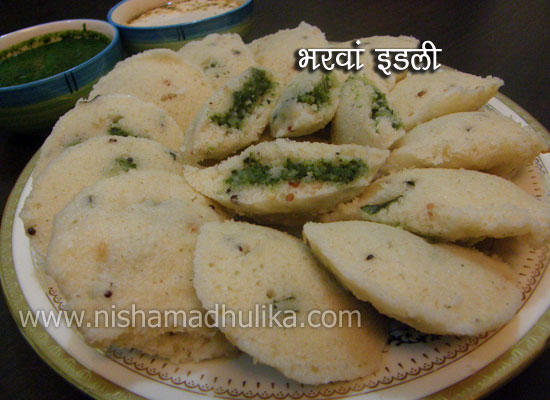 During the winter season one always desires something hot for breakfast. It can not get better than Steaming Stuffed Idlis.

If planned earlier then Dal Idli can be prepared, but Rawa Idli can me made instantly whenever you want. Filling Idli with your favorite mix makes it more palatable. So let us prepare Stuffed Idli Rawa for today's breakfast.

- How to make Stuffed Idli

First, beat curd. Filter Suji in a utensil, mix it with curd and mix properly. Add water and salt to it and blend rigorously (there should not be any bubbles present).

In a small pan(kadhai) pour 2 tsp oil and heat, now put Rie. Once the Rie is fried add curry leaves, Urad dal and fry till dal turns light brown. Add green chilli and fry some more. Cover the mixture and keep aside for 15 minutes allowing the Suji grains to get puffed.

Peel the potatoes then break into small pieces, pour oil in the pan, put green chilli and ginger paste, followed by Palak. Cook till Palak turns soft, put in potatoes and salt, stuffing required to prepare Idli is ready.

Put 2 small glasses of water in a cooker and place it on the gas to heat.

After adding eno salt to the mixture, use a spoon to blend well, as the mixture starts to ferment stop stirring(do not beat excessively after you add eno salt). 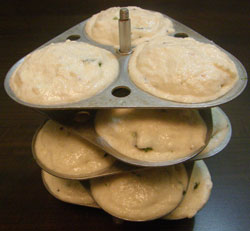 Allow Idli to cook for 10 minutes on a high flame, open the lid(poke with a knife to check if Idli is cooked, if the mixture does not stick to the knife then Idli is cooked). Take out Idli stand from the cooker, remove the plates, after cooling use a knife to take Idlis out then place them on a plate.

You can put green peas, grated carrot, paneer etc as you prefer in the stuffing required for Stuffed Rawa Idli . Stuffed Idli can also be prepared from Dal chawal.