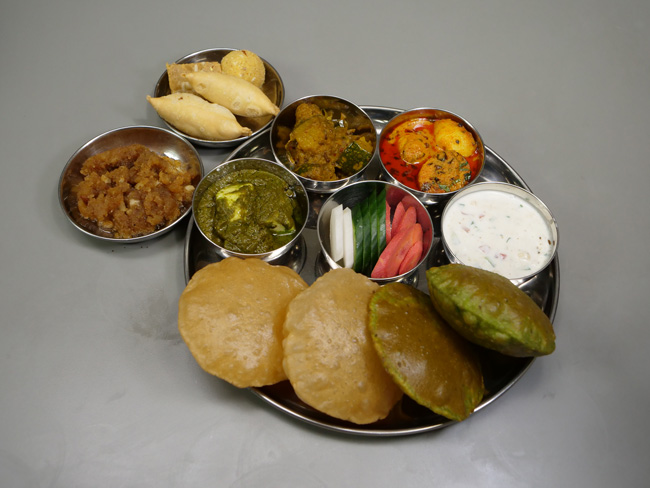 Today we are going to make Veg Special Thali to serve the guests on the day of Holi.  In this we will make palak paneer, kaddu ki sabji, dahi dum aloo, raita and two types of puris; Plain poori and spinach ki puri.  It will definitely take time to make them but their taste will be amazing.  So on the festival of Holi, make this special veg thali and enjoy the taste of it with your family and guests.

Wash and dry ½ kg of spinach and 50 grams of fenugreek thoroughly.  When dry, pour so much water in the pan that the spinach gets submerged.  When the water comes to a boil, add ½ tsp of salt and 1 tsp of sugar and mix it.  Then put spinach and fenugreek in it and boil them at high flame for 3-4 minutes while turning them.

When the time is up, take out the spinach and fenugreek and cool it.  When it cools down, put spinach-fenugreek, 2 green chilies and ½ inch of ginger in the mixer jar.  Grind them finely, then put 4 cloves, 12 black pepper and 1 big cardamom (peeled and put the seeds) in the crusher and crush them coarsely.

Cut 200 grams of paneer into pieces according to your needs.  Now put 2 tbsp of oil in the pan and heat it.  Reduce the flame to low and put ½ tsp of cumin seeds, coarsely ground spices and ½ pinch of asafoetida in hot oil and fry it lightly.

After roasting, add spinach puree and ½ cup of water in the jar and put it in the pan.  Mix them well and add ¾ tsp of salt to it and mix it well.  Then cover it and cook on medium flame till it boils.

When it comes to a boil, add 2-3 tbsp of malai and mix it.  Then add paneer pieces to it and mix it, cover it and cook it on low-medium flame for 2-3 minutes.  When the time is up, add the juice of 1 lemon to it and mix it well.  Then add 1 tbsp of ghee to it and mix.  In this way palak paneer curry will be ready.

Process of making the Dough for Normal Poori

In a bowl, add 2 cups of flour, ½ tsp of salt and 1 tsp of oil and mix it well.  Then add water little by little and knead a hard dough.  After kneading, cover it and keep it for half an hour.

Process of making the Dough for Palak Poori

In a bowl take 1 cup of flour, 2 tbsp of semolina, ¼ cup of spinach puree (spinach is washed and grinded as well as ½ green chilli is also ground), ⅓ tsp of salt, ¼ tsp of cumin seeds, ¼ tsp of carom seeds, ½ pinch of asafoetida and 1 tsp of oil.  Mix them well, then add water little by little and knead a hard dough.  After kneading, cover it and keep it for half an hour.

Wash ½ kg of pumpkin thoroughly, dry it and cut it.  Now put 3 tbsp of mustard oil in the pan and heat it.  Put 1 tsp of fenugreek seeds, 1 tsp of fennel, 1.5 tsp of coriander powder, ½ tsp of turmeric, 1 tsp of grated ginger and 2 finely chopped green chillies in hot oil.

After roasting the spices lightly, add pumpkin pieces, ¾ tsp of salt and ¾ tsp of crushed red chilli.  Fry them for 2-3 minutes, then add ¼ cup of water to it, cover and cook for 5 minutes on medium flame.

After the time is up, add some more water and cover it and cook it for 5 minutes.  After 5 minutes, stir them and add 1.5 tsp of sugar, 1 tsp of dry mango powder, ½ tsp of garam masala and 1-2 tbsp of green coriander.  Mix them well and turn off the flame and in this way the kaddu ki sabji will be ready.

Peel 6 medium sized boiled potatoes and cut them into two halves.  Then put ¼ tsp of salt on them and mix them well.  Now put 3 tbsp of oil in the pan and heat it lightly.  Then put the potato pieces in hot oil and fry them from all sides till they turn light brown.

After roasting, take them out and heat oil (2 tbsp) in a pan.  Reduce the flame to low and put ½ tsp of cumin seeds, ½ tsp of turmeric, 1 pinch of asafoetida and 1 tsp of coriander powder in hot oil.  Fry them lightly and add tomato-green chilli-ginger (1 big tomato, 1 green chilli and ½ inch of ginger) paste to it.

Turn off the flame when the oil separates from the spices.  Then add ½ cup of whipped curd little by little while stirring the spices continuously.  After adding all the curd, turn the flame back on and cook it on medium-high flame, stirring continuously, till it comes to a boil.

Now cover it and cook it on low flame for 4-5 minutes.  When the time is up, add some green coriander and mix it and turn off the flame.  In this way, dahi dum aloo ki sabzi will be ready.

Put 1 tsp of oil in a tadka pan and heat it.  Put ¼ tsp of cumin seeds in hot oil and turn off the flame.  Then add ½ pinch of asafoetida and mix it and put it in the raita.  In this way a delicious tadka raita will be ready.

Process of making Both Types of Poori

Now heat the oil, it should be very hot and the flame should be medium-high.  Then take a peda and roll it thin by applying light oil on the chuckle and rolling pin.  Put them for frying and press them to inflate.  Then fry it from both the sides till it turns golden brown in colour.  Take them out and fry both types of puris in the same way.

Now serve all the vegetables and raita on a plate, serve the puris hot and enjoy their taste.