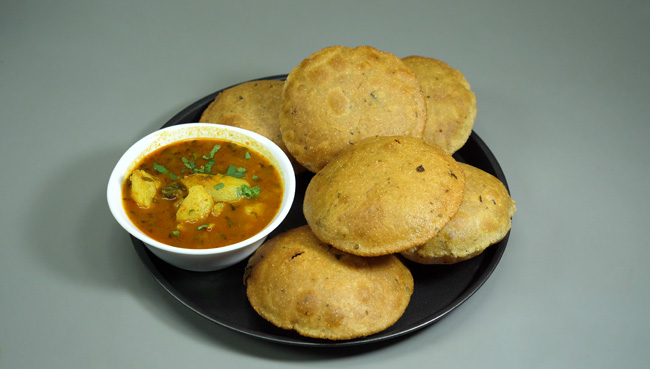 Everyone enjoys having a delicious dinner.  Keeping this in mind, today we are going to make Bedmi Puri.  Along with this, we will make special potato vegetables.  It is easy to make them but some things have to be taken care of.  So with these few special things, with some special tips, you can also make Bedmi Puri and Aloo Sabzi and enjoy its taste with your family.

Salt - a little less than ½ tsp

Process of making the Dough

Put 1 cup of wheat flour, ½ cup of semolina, ½ tsp of salt, ½ tsp of carom seeds (crushed), 1 tbsp of dry fenugreek (crushed) and 2 tbsp of oil in a bowl.  Mix them well, add lukewarm water little by little and knead a soft dough.  After kneading the dough, apply some oil on it, cover it and keep it for 1 hour.

Its dough has to be kneaded a bit soft, because after swelling the dough becomes hard.

Put ¼ cup of urad dal in the mixer jar by wiping it well with a cloth.  Grind it coarsely and keep it.  Now put 1 tsp of fennel, 1 tsp of whole coriander and ½ of tsp cumin in the pot and grind it lightly.

Then add ½ tsp of crushed red chilli, a little less than ½ tsp of salt, ½ tsp of garam masala, ¼ tsp of amchur powder and 1 pinch of asafoetida.  Fry for 1 minute while mixing them, then increase the flame a little and add ¼ cup of water to it.  Mix them and cook till they come in the form of dough.  Then turn off the flame, take it out and keep it covered.

Stuffing should not be too oily, water has to be measured and added.  If you have taken ¼ cup of lentils, then you can add ¼ cup and 1-2 tsp of more water.  Keep the stuffing covered so that the coarse grains of dal swell up.

Heat 2 tbsp of oil in a pan.  Put ½ tsp of cumin in hot oil and fry it lightly.  Then add coarsely ground spices (1 big cardamom seeds, 3 cloves and 8-10 black peppers) and reduce the flame to low.

Then add ½ tsp of turmeric, 1.5 tsp of coriander powder, 1.5 tsp of fennel powder, 2 pinch of asafoetida and tomato-green chilli-ginger (2 medium tomatoes, 1.5 green chillies and 1 inch ginger) paste in it.  Mix them well, add 1 tsp of kashmiri red chilli powder and fry while mixing.

After the spices are lightly roasted, add 1 tbsp of dry fenugreek (crushed) and mix it and fry till it leaves oil.  Meanwhile, heat 1 tbsp of ghee in a tadka pan.  Add 1 tbsp of gram flour to hot ghee and fry it on low flame till it changes colour while stirring continuously.

After roasting, turn off the flame and after the oil separates from the spices, add the roasted gram flour and mix it well.  Then add 1 cup of water to it and mix it well and let it come to a boil.  When the gravy starts boiling, break 3 boiled potatoes and put them in it.

After adding potatoes, add 2 cups of water and mix it with 1.25 tsp of salt, ½ tsp of amchur powder, ½ tsp of garam masala and 1-2 tbsp of finely chopped coriander leaves.  Mix it well and cook it on high flame for 6 minutes till it comes to a boil, while stirring occasionally.  When the time is up, the vegetable will be ready, take it out in a bowl and serve it.

Besan must be added to this vegetable.  For this, roasting gram flour with spices does not taste good.  So roast the gram flour separately in the pan till the colour changes slightly.

Process of filling the Pooris

Then by placing 1 spoon of stuffing in it, while raising the dough, press the stuffing down and close it.  After closing, press the top tip and press it lightly.  In this way prepare the rest of the balls by filling them.

Process of frying the Pooris

Apply some oil on the chuckle and put some oil on the rolling pin.  Then with a light hand, rolling out the edges, roll it out slightly thicker.  Heat oil in a pan, oil should be medium hot and flame should be low-medium.  Put the poori in hot oil and let it fry till it comes up.

Then inflate them by pressing.  Now fry them till they turn brown.  Roll and fry all the pooris in the same way and Bedmi Puri will be ready.

For frying puris, the oil should be medium hot and the flame should be low-medium.

In this way, Bedmi Poori and potato special sabzi will be ready.  Serve them and enjoy their taste. 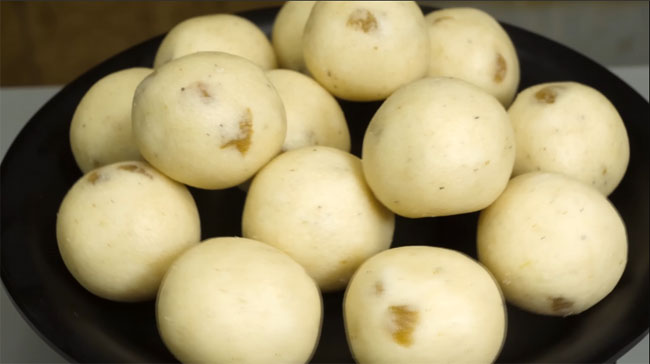