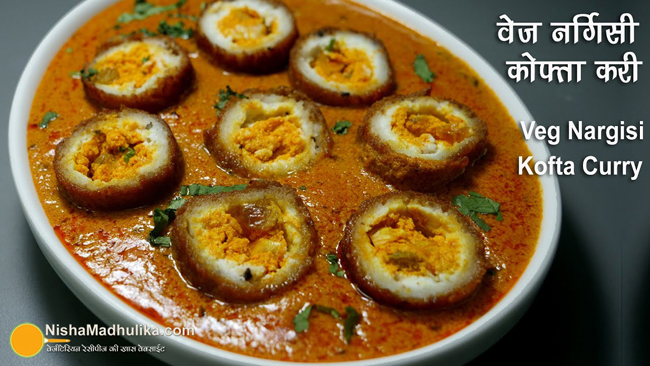 Paneer Nargisi Koftas are the pride of many parties.  Many people make this dish at their parties or on special occasions.  Now you too make your party the best party by knowing the easy method of this special dish.  The method of making it is very simple and the ingredients will also be present in your kitchen, prepare it and become a star host of your party.

Process of making Stuffing for Kofte

Add ⅓ tsp of salt and 4 tbsp of cornflour to the remaining paneer and mix.  After making the dough, break it into small pieces to make koftas.  Now make small balls of stuffing.

Now take the small pieces of paneer that were made, round them in your hands and give the shape of a bowl.  Then put a round of stuffing inside it and close it well.  Give it an oval shape in your hands and keep it in the same way.

Before frying them, take 4 tbsp of all purpose flour in a bowl and mix it with little water and make a thin batter.  Then add ¼ tsp of salt and ¼ tsp of ground black pepper and mix it well.  The batter for coating will be ready, as well as grind the soya chunks and keep it in a plate.

To fry them, heat oil in a pan, remember the oil should be medium-high.  Put the rounds of koftas in oil and fry them till they turn brown.  Remember, do not fry them on low flame, otherwise the paneer will melt and come out.  Similarly fry all the koftas.  The koftas will be ready.

After this, add 2 tomatoes, 1 green chili and ½ inch of ginger paste and stir it well.  Then add 1 tsp of kashmiri red chili and fry till the spices leave the oil.  Remember the flame will remain medium and you have to keep stirring it after a while or else the spices will start coming down.

Now make a paste of 10-12 cashews and 2 tbsp of melon seeds (the seeds of cashew and melon are to be soaked in water for half an hour) and put them in the spices and fry them well till the oil separates.  After roasting, add 1 tbsp of butter, 1.5 cup of water, ¾ tsp of salt, ¼ tsp of garam masala and 1-2 tbsp of green coriander and mix it well.  Then cover it and cook it on low flame for 4-5 minutes.  When the time is up, the gravy will also be ready.

Now put it in a bowl and cut the koftas in half and put them in the gravy.  Now serve it with roti, naan or lachha paratha.

Paneer has to be grated well.

The oil should be medium-high hot while frying the koftas.