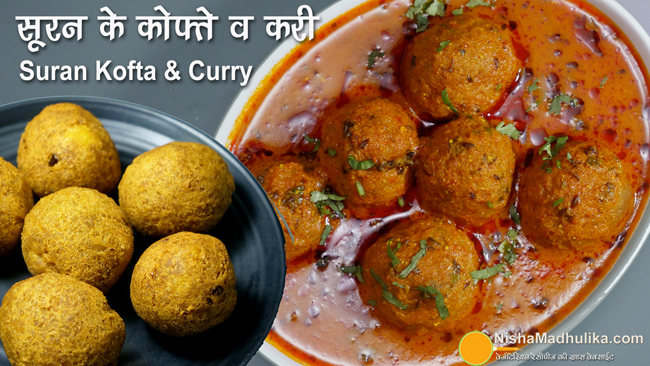 Suran or jimikand are seen in the market only during the winter season.  But there are many people who do not even know that there is a vegetable called suran.  Suran is very beneficial for the body and for health.  And on the auspicious occasion of Deepawali, today we are going to make suran koftas which you can eat for breakfast as well as make suran curry which can be served in the day or dinner.

After applying oil in the hands, remove the black thick peel of 300 grams of suran and cut it into small pieces.  Then put chopped suran, 1 cup of water, 1 tsp of salt, ½ tsp of turmeric powder and squeeze the juice of half a lemon in the cooker.  Mix all these well and close the cooker and boil it on high flame till one whistle comes.  After a whistle, reduce the flame to low and cook for 7 minutes.

When the time is up, turn off the gas and cool the cooker.  Then filter them out and keep them in a bowl, now mash them well.  After mashing, add ¾ tsp of salt, 2 finely chopped green chillies, ½ inch of grated ginger, 1 tsp of coriander powder, ¼ tsp of red chilli, ½ tsp of dry mango powder, ⅛ tsp of baking soda and ¼ cup of gram flour and mix well.  Make a dough by mixing them, the dough for suran kofta will be ready.

Put oil in a pan and heat it.  The oil should be medium-high hot and the flame should also be medium.  Apply a little water on the hand and pick up a little dough, then make a small round and put it in the oil.  Fry them, while stirring them a little at a time, till they turn golden brown from all sides.  When they are golden brown, take them out and make the rest of the koftas in the same way.  In this way the suran koftas will be ready.

Put 2 tbsp of mustard oil in a pan and heat it lightly.  Then add 5-6 black pepper, 2 cloves, 1 piece of cinnamon, 1 big cardamom (peeled and seeds added), 1 bay leaf and ½ tsp of cumin and fry the spices a bit.  Now put 2 tomatoes, ½ inch of ginger and 1 green chili paste in it.  Then add ½ tsp of turmeric powder, 1 tsp of coriander powder and 1 tsp of kashmiri red chilli and mix the spices well.  After mixing, add 1 tsp of dry fenugreek (crush it and remove the stalk) and fry till it leaves oil.

After the spices are roasted well, turn off the flame and cool them a bit.  Then put ½ cup of curd in it and mix it well and turn on the flame again.  Now fry them till they come to a boil, then cook till they leave the oil after boiling.  Then add 1 cup of water (you can adjust the amount of water according to your choice as thin or thick gravy as you like).

Serve koftas with green chutney and tomato ketchup for breakfast.  For gravy, put koftas in a bowl and pour gravy on it, suran kofta curry will be ready.

You can make suran koftas and keep them in the fridge for three days and eat them after making curry.

Suran ki kofta curry can also be eaten by keeping it in the fridge for 3 days.