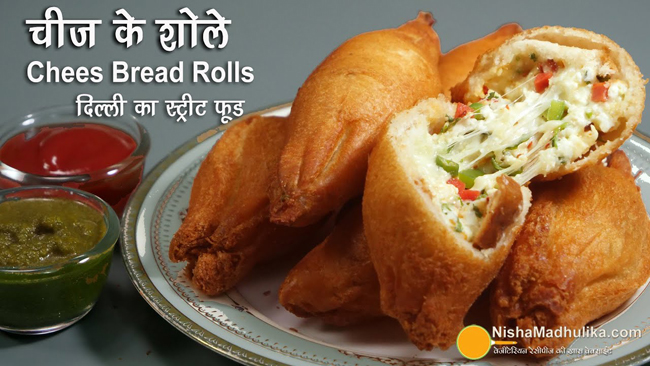 Cheese Sholay is a famous street food recipe of Delhi.  It is made from different types of stuffing and it is very tasty to eat.  Today we are going to make bread stuffed with cheese.  It will have cheese along with paneer and some vegetable spices.  Their special thing is that if all the family members are coming to your house, then a day before you can assemble them and keep them in the fridge.  Then on the second day when everyone comes, fry it immediately and serve it hot.

Also, in a bowl, add a little water to 2 tbsp of all purpose flour and make a slurry until it becomes smooth.  This is called slurry, it will be used to stick the bread.

Take two slices of bread, cut one of them on the opposite sides of the bread.  Now apply some water on it and roll it with a rolling pin.  Remember, fresh bread has to be taken, otherwise it may break while flattening with a rolling pin.  After rolling once again after applying some water, roll the second one by applying water in the same way.

Heat oil in a pan, the oil should be medium-high hot and flame should be medium.  When hot, add sholas one by one and fry them.  Fry them while turning them till they turn golden brown from all sides.  Then take it out and fry the rest in the same way, Bread Cheese Sholay will be ready.  Serve them to the guests or family members with green chutney and sauce and enjoy their taste.

While assembling the bread sholay, roll the bread and press it well from the corners.

The oil should be medium hot for frying.