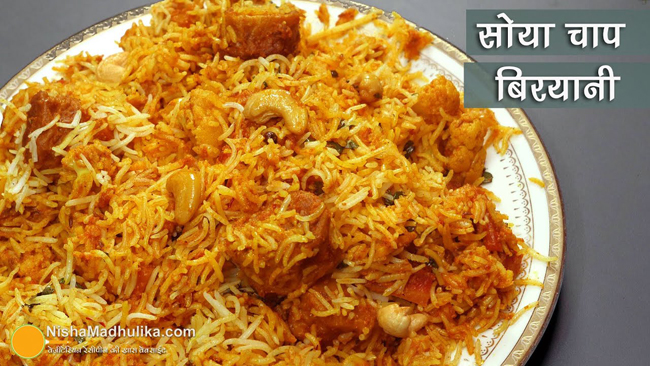 Soya Chaap Dum Biryani is a very famous street food of Delhi.  It is very easy to make and you will get all the ingredients to make it in your kitchen.  The taste of rice wrapped in spices and soya chaap wrapped in curd is amazing.  So make this dish with this easy method and enjoy the taste of this delicious Dum Biryani.

Curd - a little more than ½ cup

Soak 1 cup of basmati rice in water for 20 minutes.  When the time is up, put 4 cups of water, 2 bay leaves, 1 inch cinnamon, 2 small cardamoms, 3 cloves, 6-7 black peppers and 2 tsp of oil in the pot.  Now let this water come to a boil, when it comes to boil, remove the water from rice and put them in it.  Cook it on high flame till it comes back to boil, then reduce the flame to low-medium and add 1 tsp of salt to it and cook the rice 80 percent while stirring it for a while.

When the rice is 80 percent cooked, turn off the flame and filter it.  Immediately after filtering the rice, remove the sieve and spread the rice in a big tray so that the rice does not cook with steam.  In this way the rice will be ready, spread it and keep it to cool down.

Cut 3 soya chaap sticks into small pieces.  Now heat oil in the pan on medium-high flame, remember oil should also be medium-high hot.  Put the pieces of chaap in hot oil and fry it till it turns golden brown from both the sides and it will be ready.  Now put 10-12 cashew nuts in the same oil and fry till it becomes light brown.  In this way the cashew nuts will also be ready after frying.

Then put 2-3 tbsp of oil in a pan and heat it.  When the oil is hot, reduce the flame to low and add 1 inch of cinnamon, 1 small cardamom, 1 big cardamom (peeled and add seeds), 4 cloves, 7-8 black peppers and 1 tsp of cumin.  Fry these spices lightly and add 2 green chilies cut lengthwise and ½ inch of ginger, lengthwise chopped.  Then add tomato-ginger-green chili paste (2 tomatoes, ½ inch of ginger and 2 green chilies) and fry till it leaves oil.

After the spices are lightly roasted, add 1 cup of cauliflower and 1 carrot, lengthwise chopped and mix them.  Then cover them and cook for 4-5 minutes.  Once the time is over, cut the cabbage and see if it is being cut comfortably then it will be cooked.  Now reduce the flame to low and add curd mixed with spices and cook for 2 minutes while stirring on a low flame.

Make the flame medium and add 1 tsp of ghee to it and cook the masala while stirring it for a while till it leaves the oil.  After oil separates from the masala, add 1 tsp of salt and mix it, then put fried chaap in it and coat it well in the gravy.  Now add ¾ cup of water to it, then cover it and cook it for 5 minutes.  When the time is up, the vegetable with gravy for biryani will be ready.

Now take out the vegetable from the pan for biryani.  In the pan, the first layer will be made of vegetables, put rice on top of it and make a second layer.  Then put the vegetable which was taken out over the rice.  Then pour the remaining rice layer over it and pour some ghee on it.

Then put saffron milk on it (20-25 saffron threads are to be soaked in 2 tbsp of milk), roasted cashews, some green coriander and thinly sliced ​​ginger.  Cover it with foil paper and place a plate on it, then keep a chakla or any heavy vessel for weight.  Now cook it on low flame for 20 minutes.

When the time is up, mix it lightly, soya chaap dum biryani will be ready.  Serve it and enjoy its taste.

Rice has to be cooked not completely but only 80 percent.