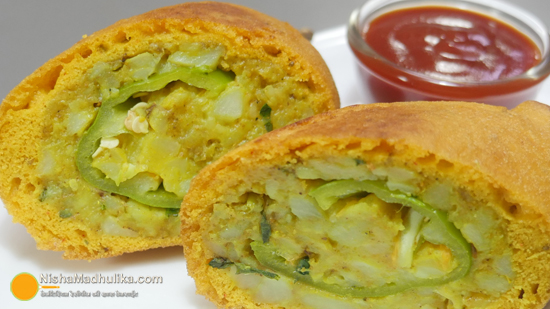 Jodhpuri Mirchi Vada is unique in taste as compared to regular Mirchi Vada. It is spicier to eat and Vada is enough to end the hunger spank of one time.

How to make Jodhpuri Mirchi Vada

Take 1.5 cups of chickpea flour in a bowl and add some water to it for dissolving its lumps. Make the batter of smoother texture and it should have a pouring consistency. Add a ½ teaspoon of salt, turmeric powder, carom seeds after crushing them, red chilli powder to it. Add a ⅛ teaspoon of baking soda to it and keep the batter aside to ferment for a while.

Preheat a pan, add a tablespoon of oil in it. Add a ½ pinch of asafoetida, a ½ teaspoon of cumin seeds to it and roast for a while. Add 6 boiled potatoes to it after breaking them. Turn the flame to low and add 2 finely chopped green chillies to it.

Add a ½ teaspoon of Garam Masala, 2 to 3 tablespoons of finely chopped green coriander to it. Pour the stuffing in a plate and let it cool down. 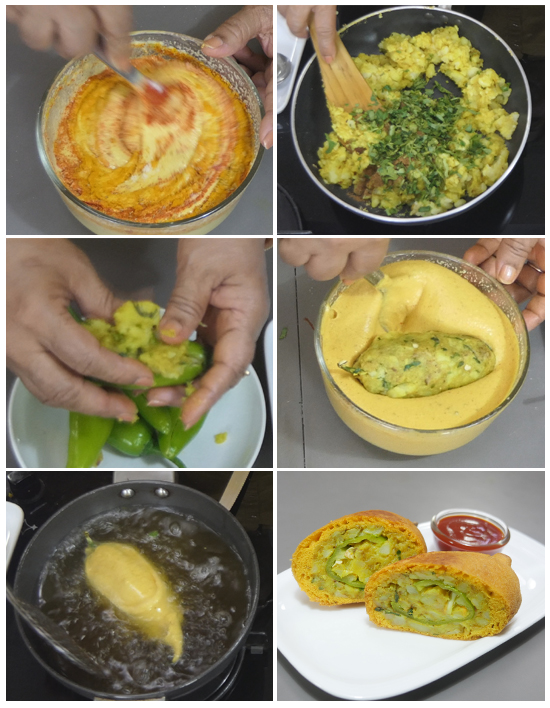 Take 6 thicker sized green chillies, chop these and cut it slightly from a side. Remove its seeds and hollow them. Preheat oil in a wok for frying the Vadas. Insert some stuffing inside the chilli and coat it with the stuffing well. Assemble all the chillies likewise.

After assembling all the chillies, lift chilli and coat it carefully with the batter. Lift the Vada holding its stalk and add it in the wok for frying. Rightly heated oil and a medium flame is required to fry the Mirchi Vada.

While frying the Vada, do not stir it in the beginning but, bounce some oil over it using the ladle. After a while, stir and fry it for 2 to 3 minutes until it becomes golden brown.  After frying the Vada, drain it out and place it on a plate. Fry the rest of Mirchi Vada likewise.

You can add Chaat Masala instead of Garam Masala to it.