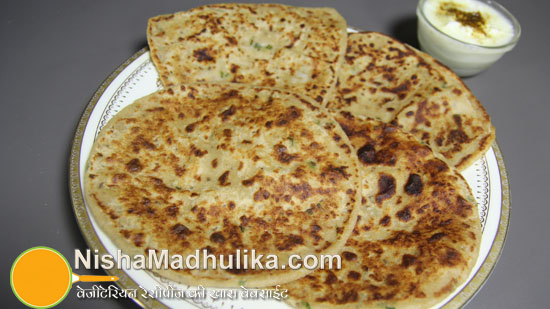 Sprouted lentils are loaded with proteins, carbohydrates and vitamins. If kids don't relish eating these sprouted dals then stuff them in paranthas. These sprouted masala paranthas are not only healthy to eat but taste delicious as well.

Ground the sprouted moong dal in a mixer jar little coarsely. Heat 1/2 tsp oil in a pan. Splutter cumin seeds in the oil first and then add coriander powder and saute for a while. Now mix sprouted moong dal, salt and red chilly powder. Mix everything really well and keep stirring constantly.

Stuffing is now done and ready, turn off the flame and transfer it to a bowl. 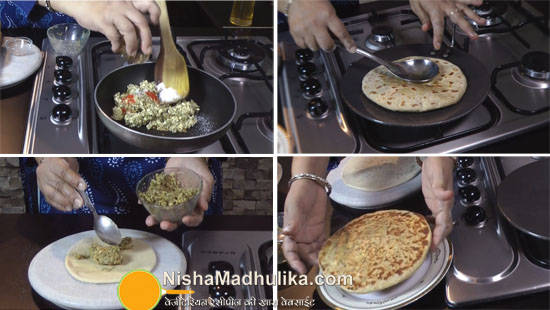 Heat a tawa on flame. Make a small lump from the kneaded dough and roll giving it a round shape. Dust with some dry flour and roll out into 2.5 to 3 inch round parantha. Place 2 tsp stuffing over the rolled parantha and spread it evenly. Lift the parantha from all sides and close the stuffing. Gently press the dough ball to spread the stuffing evenly. Now roll out into parantha with 7 to 8 inch diameter.

Take off the roasted parantha from tawa and place it over a bowl kept above the plate. Likewise prepare rest of the paranthas as well. Steaming hot and mouth drooling sprouted moong dal paranthas are ready. Serve them piping hot with aloo tamatar sabzi, raita, chutney or pickle and relish eating.