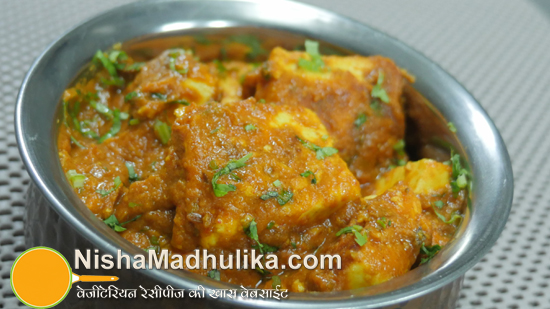 Paneer tikka masala gravy prepared with paneer chunks marinated with curd and desi spices and then roasted on tawa on very low flame and then simmered in rich makhani gravy is one of the most relish recipe. We can prepare it for any special occasion.

Start with cutting the paneer into 1 or 3/4 cm thick chunks for making paneer tikka masala gravy.

Grind the tomatoes in a mixer jar into a fine paste.

After 20 minutes, these paneer chunks will be ready to be roasted. To roast the paneer chunks, take a non stick pan and pour 1 to 2 tsp oil over it. Place it on flame to heat. Now one by one place the marinated paneer chunks over the tawa and roast until they get golden brown from beneath.

The moments these chunks get brown from beneath, flip the side and let them roast from the other side as well. After a while, when the tikkas are roasted well and get golden brown in color, turn off the flame. 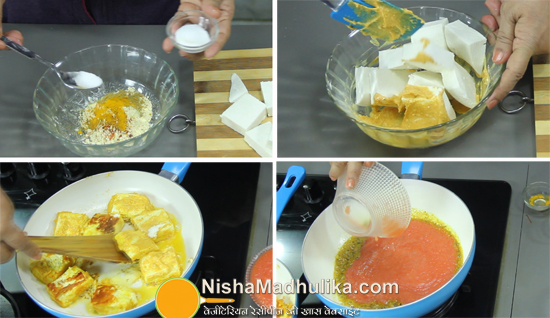 Prepare the gravy for the tikkas

To prepare the gravy, heat a pan over a flame and add 2 tbsp oil to it. When the oil is heated well, add cumin seeds to it. When the seeds crackle, add asafoetida, 1/4 tsp turmeric powder, 1 tsp coriander powder, kasuri methi and 1/2 tsp ginger paste. Saute the masala for a while on low flame.

After sauteing the masala, add tomato paste, add 1/2 tsp red chilly powder. Saute the masala until the oil starts separating from it.

Meanwhile, in a small pan heat 1 tsp oil and to it add 1 tbsp chickpea flour to it. Stir constantly and roast until there is slight change in the color.

Add this roasted chickpea flour to the gravy and saute the masala for a while. After a while, when oil starts separating from it, masala will be ready. After this add less than 1/2 cup of water and mix well. Also add 1/2 tsp salt, sugar, garam masala and green coriander to the gravy and stir to mix well. 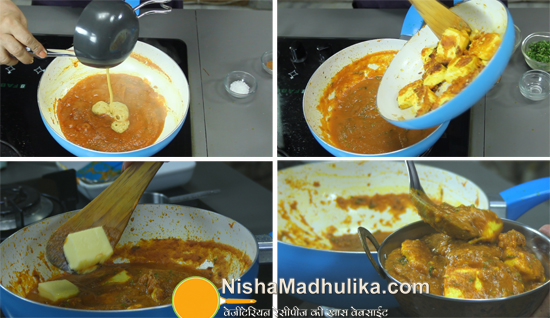 To this gravy add roasted paneer tikka chunks and mix them well to the gravy. After this, cover the gravy and let it simmer for 2 to 4 minutes on low flame.

After 4 minutes, mix some butter to the sabzi and turn off the flame. Lip smacking paneer tikka masala is ready, transfer it to a serving bowl.