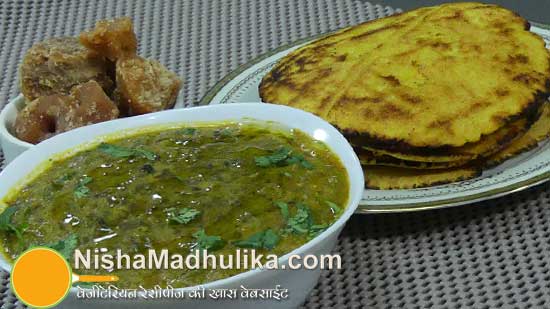 Clean the sarso saag, remove stalk and separate the leaves from it. Wash the leaves thoroughly with water, drain out the excess water and chop the leaves finely.

Likewise wash the spinach, remove stalk and separate the leaves from it and wash with water. drain out the excess water and chop the leaves finely. Clean the Bathua leaves and wash them thoroughly as well. Dry and chop them finely.

Wash tomato, green chilly and ginger, place them in mixture jar and make a fine paste.

Add sarso leaves, spinach and  bathua leaves in a pressure cooker, followed by 1/2 cup water. Close the pressure cooker with a lid and cook until one whistle. After it simmers once, turn off the flame and let the steam escape on its own.

Heat 2 tbsp oil in a wok. When the oil is hot, add cumin seeds. After they crackle, add asafoetida, turmeric powder and coriander powder. Saute for a while and add maize flour into it. Stir constantly to roast. Now add tomato-green chilly-ginger paste into it and stir well. Now saute the masala until you see oil leaving the edges of masala.

Open the lid of pressure cooker and mash the veggies with a ladle or spoon. 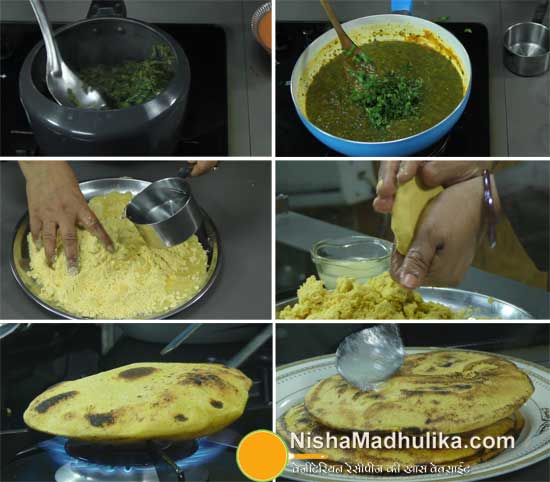 When the masala is cooked well, add veggies into it, followed by red chilly powder and salt. Mix well and add 1 cup water and some green coriander as well. Cook on low flame for 10 to 12 minutes. Do stir the sabzi after every 1 to 2 minutes. Sabzi is now ready.

How to make Makki Ki Roti

Take maize flour in a vessel and add water into it in small portions to knead a stiff and tight dough. Now pinch some amount of dough and knead it well for 2 to 3 minutes until smooth and soft. Preheat a tawa. Pinch some dough and roll into a round shape. Wet your hands with some water and flatten the dough  ball into a chapatti. Place this very gently on the tawa.

The color of roti has turned dark on the surface. Flip the side and let it cook from beneath as well till it gets golden brown spots. Now lift the roti with tongs and roast it directly on the flame until it gets golden brown spots on both the sides. Roti is roasted well from both sides, place it over a plate and apply some ghee over it. Likewise prepare rest of the rotis.

Maize flour roti and sarso saag is ready. Pour some ghee over the saag and garnish it with some coriander sprigs.

If you like eating garlic, then after you splutter cumin seeds, coarsely crush 5 to 6 garlic cloves and add it to the pan. Saute until it little pinkish and rest follow the same procedure to make saag.