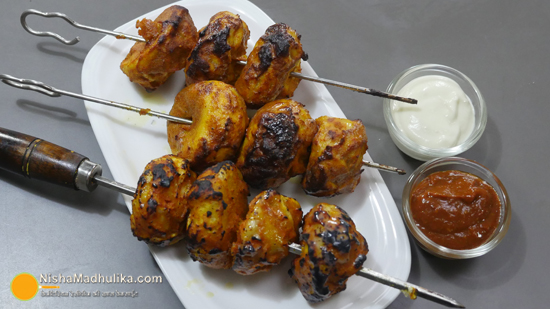 Tandoori momos recipe is a fusion of eastern states and Delhi. It has an amazing taste of veggies and spices which makes it more scrumptious to eat.

How to make Tandoori Momos

Take a cup of refined flour in a bowl and add a ¼ teaspoon of salt to it. Stir and mix well both the ingredients. Add a ½ cup of water to it in the intervals and knead its soft dough. After kneading the dough, cover and rest it for 15 to 20 minutes.

Saute the ingredients and add a ½ teaspoon of salt to it. Add 1 to 2 tablespoons of green coriander to it and mix well. The stuffing is ready.

For assembling the momos

Mash the dough softly after 20 minutes. Divide it into the dough lumps and keep them aside after covering. Lift a dough lump, roll it into a round-shaped Peda. Coat the lump with dry flour and flatten in thinly.

For steaming the momos

Take a vessel and add 2 cups of water to it. Cover and boil it for a while. Grease a strainer with some oil and place it over the vessel.  Arrange the momos in it at some distance and cook while covering them for 10 minutes. The momos will be cooked after 10 minutes. 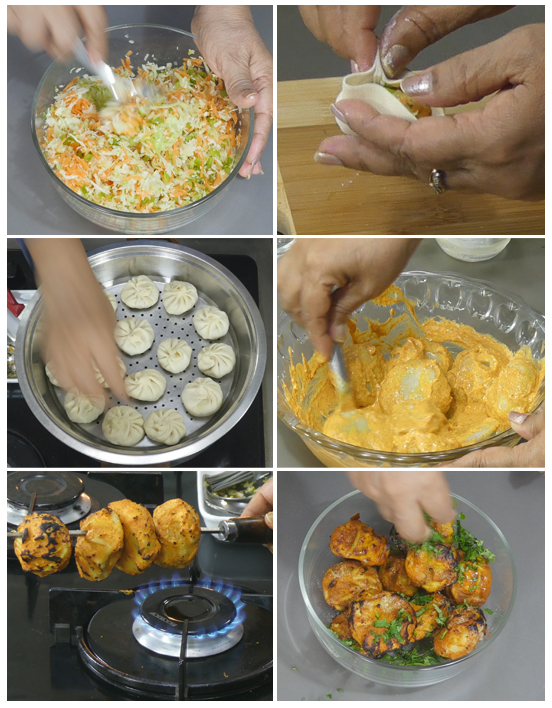 Add a ¼ teaspoon of salt to it and mix all the ingredients well.  Add the momos to it and coat them well with the mixture. Let them rest for 20 minutes.

For cooking Tandoori Momos in an oven

For cooking Tandoori Momos on the stove

Take a skewer, assemble the momos in it and place it on the stove. Rotate and cook until there are black spots over them on medium flame.

The momos will be cooked once the black spots appear over them. After cooking the momos, spread some butter over them and Tandoori momos are ready to be served.

Coat the momos with butter and spread some coriander leaves over them. You can even spread green onion over them and serve them. Serve Tandoori momos along with red momos dip, red chilli sauce or mayonnaise.